FrenchDistrict > Florida > Penny for our thoughts > Stereotypically French!…Not our type!

“I am a rare species, not a stereotype.” said Ivan Coyote. Hearing about French stereotypes, one tends to wonder…true or faux?

Stereotypes! What would we do without them?  There is the negative connotation to it – ‘The tried and tested’, ‘The hackneyed’, ‘The clichés’ et all. Let’s face it; the same boring stereotypes get used time and time again. White people can’t dance, black people like watermelons, Asians like math, etc. So, what can be said about the French…

“Math has a lot of negative stereotypes, but it can actually be fun and incredibly empowering.” Danica McKellar. Going along with the status quo of French stereotype whispers and keeping in the spirit of poking fun at it, here are some of the most common ones rendered with their geniuinity.

1. The French stink and don’t shower

Totally faux. Unless you have met someone strolling out of the Middle Ages, the French are pretty clean. Well, let’s just say, at least most of us are!

2. The French wear way too much perfume

True for the most part. This stereotype was brought in to debunk the above stinky one in this modern age. And well, we don’t use “Chanel” for nothing! And trust me; you don’t want to sit next to an older generation French woman in an Opera or a show. You won’t know if the music is overwhelming or the smell of her perfume!

3. The French women are thin 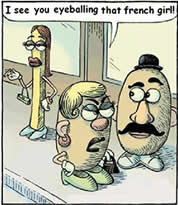 True and faux. Despite the regional differences in French attitudes and body shapes, on an average the French women are thin. Who better to ask but a French woman as to how to pull off eating a pain au chocolat and a croissant for breakfast?

4. The French are rude

Faux, unless experience proves otherwise 😉 The French are just as nice as any of you out there. Unless of course, you have had the misfortune of meeting the stereotypical (pun intended) Parisian with the ‘if I’m-not-looking-at-you, you’re-not-really-there’ attitude!

5. The French consider themselves superior to everyone else

True and Faux. Ahh! But we are superior, although this one cannot be restrained by the bounds of true or false. We, the French take pride in our culture and have a rather lavish lifestyle with longer vacations than an average American. So, you could invariably hear a French person saying “Ehhh?! Ce n’est pas possible!” (It’s not possible) in case of American lifestyle. And who could say we are wrong?

6. The French bread is the best

Gloriously true. The bread really is as good as you’ve heard. What’s better, you probably haven’t heard how spectacular the butter is. And when you smear it onto your toasted baguette … man!

True. When it comes to smoking, France is said to be a “Mad Men” world. Despite the intense public health campaigns against smoking, shockingly and unfortunately, smoking is picked up as a habit at a very young age in France.

Faux. Some French people may dislike Americans, but that’s the case everywhere in the world. The French are very hospitable to US visitors and emulating the Americans is commonplace among French teens. And besides, if it weren’t for America in World War II, we’d be speaking German! So, no! We don’t hate Americans.

9. The French won’t speak English and will laugh at your French

Fauxly true 😉 Sure, you are bound to get an “Ehhh?!” or raised eyebrow look when your French is not understood, but the French do that even amongst themselves when someone has a different accent. It is after all a difficult language to learn. So, don’t let our “Ehhh?!” and “Hein?!” dishearten you. And we sure do love French with an American accent. That charm is always a winner.

10. The French eat a lot of cheese and drink a lot of wine

Thankfully, very true. And seriously, is anyone complaining?! 🙂

Of course, these are just musings of the common mind, so caveat lector, and let your inner Frenchie beware… oh la la!