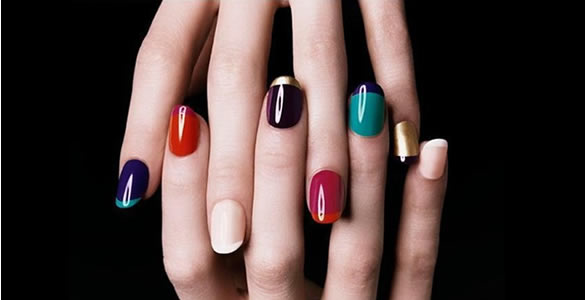 Colors can say so much. Red lips say “daring,” a black gown “timeless,” neon anything says “I wasn’t around in the ’80s.” And a French manicure?

Monday night TV is a beauty queen and fashionista’s dream TV night. While men pine over the selection of shows, entertainment and glamour is in store for women. Gossip Girl gave an inside look at the fabulously stylish of Upper East Side, MTV’s The City shows you the fashion industry and ABC throws you into the world of uber-primping contestants of True Beauty. And who can’t help but notice the nails of those ladies on screen! And it looks like the French is still what’s beautiful to these detail obsessed ladies…

Legend has it, Cleopatra wore red nail polish. So what’s with the fascination of French manicure?

Manicures have been a part of the society for centuries now. As far as the history of the name goes, no one really knows if the manicure is truly “Frenchie” in its origin. A popular belief however goes that it was named after the upper class French ladies in 1930’s who wanted a “clean and natural look”. A pale pink base and bright white tips have come to characterize the ever-so-popular French manicure. The edge of the white gives it a sharp, distinctive look with the contrast of light pink. Trust this singular look to coordinate with any wardrobe and not create a clash of colors. It blends well with a casual fun event as also with a black-tie, evening-gown dinner. From day job to dance floor, first date to wedding day, hip to hate couture- accessorize your nails with the French.

French manicure, believe it or not is a common request at nail salons everywhere. Even in France, this mani is called “la French” although the invention is considered American. Funny world, huh?
Its not a quick paint-and-go manicure, but a little practice can get you rolling. For all the DIY-er’s out there, here’s a quick run-through of getting that French manicure look. Get a basic French manicure kit from any beauty store and follow steps one, two and three…hahaha. 🙂

Following the trend. Nail by nail…

Some may “nay” a French manicure considering it a very nineties thing. New trends in nail art are catching the eye. Stylists have added a new twist to the old, boring French manicure. There is now a reverse French manicure which is exactly what the name suggests. The French manicure has found its comeback with outside-the-box colors as well. Stylists and DIY nail artists have come up with striped and contrasting French manicure styles and they are fast gaining popularity. Dark black nails with golden tips, clear coated nails with red, minty or tangerine tips, caramel-on-cappuccino mix seem to have given the old-school French mani look a high-fashion-reboot. Personify the saying, “You can go crazy without really going crazy!” 🙂

So, French manicure, Yay or Nay…

Dita Von Teese said “You can be the ripest, juiciest peach in the world, and there’s still going to be somebody who hates peaches.” Passe or not is for you to decide. Whatever your choice in manicures, well-groomed nails are always eye-catchers. So, get that fashionista in you rocking! As for all you men out there, just compliment women on their nails and you are good to go. 😉