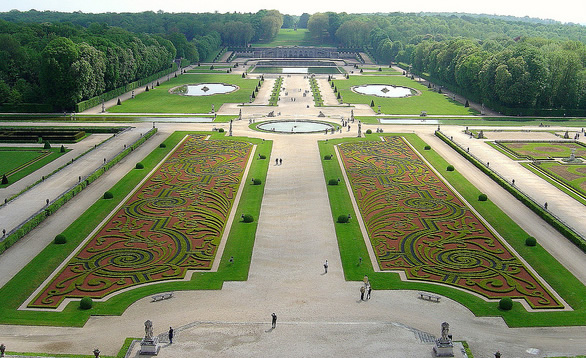 Ile-de-France in north-central France has more than just Paris to offer its visitors. The wealthiest and most populated region of France is also home to the beautiful village of Maincy. Retaining its rural character, Maincy holds the treasures of the castle of Vaux-le-Vicomte.  A precursor to Versailles, the outstanding beauty of Vaux-le-Vicomte is a must see.

Having seen light since the Middle Ages, Maincy is a small picturesque village in north-central France. About 60 km from Paris, Maincy shows evidences of history in the form of its Romanesque church and the magnificent castle of Vaux-le-Vicomte.

Small ivy covered houses, a restored medieval laundry location, stone walls and small sidewalks with open canals running along, give the village its rural character. The village is connected by the Bridge of Trois Moulins.  The famous French artist Paul Cezanne immortalized this bridge in his painting “Bridge Maincy” which is exhibited in Paris. The village draws peace and quiet away from the hustle and bustle of Paris. A walk through the village will take you back in time.

The castle of Vaux-le-Vicomte was one of the main sources of inspiration for the Chateaux de Versailles. The minister of finances, Nicolas Fouquet had the castle built in the mid 17th century as his home. He chose three men of genius for the task of its construction- the architect Le Vau, the decorator Charles Le Brun and the landscape gardener Andre Le Notre. The castle is so splendid that it is said that Nicolas Fouquet upset King Louis XIV when he showed it off to the king. So much so, that the king had Fouquet arrested. The rest as they say is history.

Vaux-le-Vicomte may often times be overlooked because of its location, but it holds a greater visiting value than most other Chateaux in the Loire valley. Descendants of Nicolas Fouquet, the Vogue family are in charge of this Cinderella castle in association with the French Ministry of Culture. The castle is open to public and the great fireworks events, exhibition of royal garments, and the splendid garden make this castle a MUST-SEE.

The estate that is Vaux-le-Vicomte is made of two parts- the castle itself and the gardens. The castle is an admirable sight with all its royal furnishings, the Musée des Equipages and architectural brilliance. The castle is reminiscent of royal times and grandeur – you could actually imagine the royal feast that was catered for King Louis and all the festivities that took place. However, in our opinion it is the garden and grounds that make the Vaux-le-Vicomte a masterpiece. A tour through these gardens is well worth your time – revelations of secret passages and vistas of the dramatic patterns that remain the same through all seasons make the garden incredible. Le Notre went on to add fountains to the garden making the experience even more magical.