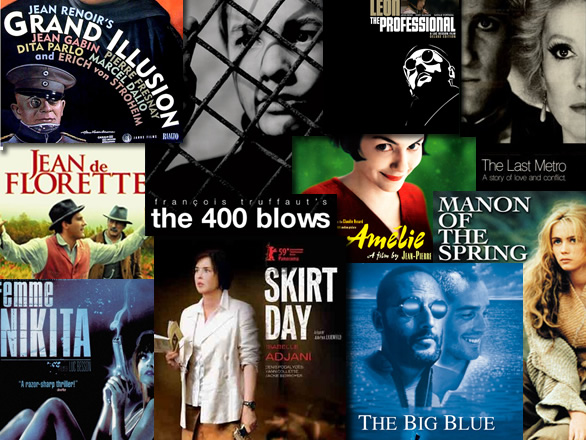 Amelie still seeks solitude. She amuses herself with silly questions about the world below, such as “How many people are having an orgasm right now?”

“Oh how Shakespeare would have loved cinema!” said Derek Jarman. And even Shakespeare himself wouldn’t contest that statement! We all love cinema- in one way or another. The story, the characters, the dialogues – they show as a different world. From humor, to horror, to philosophy, to every other emotion…a cinema can have us all reeling for more. Almost every country has their share of movies that have marked them in history. The dark eyed waitress and her whimsies immortalized Amelie. We loved watching every minute of her living in her own sweet world. We give you some of the best French movies (in our opinion) that will make you want to toss your berets in the air and scream “Oui”.

Picture us with a clipboard! Here is the “Take One” of French District’s list of the best French movies ever.

One of France’s most famous actors Gerard Depardieu plays a hunchback living in Provence. He suffers at the hands of the greedy landlord and peasant played by Yves Montand and Daniel Auteuil.

Second on our list is the sequel to Jean de Florette. The film revolves around the beautiful Emmanuelle Beart’s vengeful plot against a peasant and a greedy landlord. It’s 27 years later, and the movie still holds its ground with excellent roles and a great story.

Often considered a trend setter for a new French cinema wave, this movie portrays the life of a mischievous teenager. Modeled on the director Francois Truffaut’s own childhood, the film shows you the child’s emotions and restlessness.

Opening around the time of the World War II, this movie weaved cinematic and social importance by illustrating that the European differences didn’t have to lead to war. This movie became a trend setter of its time for prison-of-war movies.

A 13 year old Natalie Portman saying “Death is…whimsical…today” is moving. An amazing movie depicting the life of teenage girl whose parents are killed in a police raid. Jean Reno does complete justice to the role of Leon.

Director Francois Truffaut depicts Paris during the Second World War with his hopeful plot of coincidences and narrow escapes that engulfed the life of people then. The movie portrays an actress who struggles to keep a Paris theatrical company running under the German Occupation, in the absence of her husband who is a Jew.

A simple tale of love, friendship and the sea, The big blue is a delight to watch. The movie is about two close friends who share a passion for free diving and their determination to excel at it. The romance steps in when one of the friends meets a woman and is torn between the choice of his love and his love of the sea.

Isabelle Adjani’s portrayal of an instructor at a school for troubled children will take you through a drama that unfolds at breakneck speed. The movie is a stark political satire addressing social, sexual, racial, cultural and religious divisions of a modern day France.

A chilling crime thriller, Nikita is the only female member of a gang that has been condemned to death after a robbery fails. She has but one chance at survival – recruitment as an assassin for the French Government. The advice “There are two things that are infinite: femininity and means to take advantage of it.” given to her in the movie is memorable. Hear, hear James Bond!

How can anyone not love the whimsical world of the shy Amelie! The soundtrack that leads you through her tale of happiness is also excellent.

Since we are speaking of Amelie, we will leave you with her until we come back with the remainder of our French popcorn talk.