FrenchDistrict > New York > Penny for our thoughts > Leading the world to a change the French way! 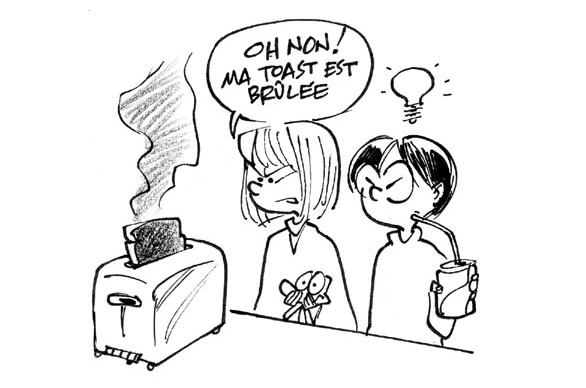 Yellow chequer…and the French take the trophy for these inventions!

Women of the world would gasp in unison if their precious “little black dress” were to stop existing. Try imagining a world with no Champagne! In such a world, what would Winston Churchill have said instead of “Remember, gentlemen, it’s not just France we are fighting for, it’s Champagne!” Just the absence of these two things in our world seems horrific. So, let’s take a minute to thank the inventors, the French!

The French have touched our lives in many ways and in many areas – the way we live, work and play. Knowingly or unknowingly they are a part of our lives. Here’s to acknowledging the most influential inventions, courtesy à la France.

Women, thank Coco Chanel, for without her your closet and your go to look would have never been the same. And men’s eyes would have wandered around and never found Audrey Hepburn look like a dream come true in Breakfast at Tiffany’s.

The complicated elixir needs no introduction or description. Cheers to the French for giving the world a drink for every occasion.

An extraordinary system that gave eyes even to the blind! Louis Braille, a French National Hero, improved a system of coded and raised dots which has become the global form of communication for the blind.

Defining every woman’s undergarment over centuries is the invention by the French woman, Herminie Cadolle. Little did she know that her lingerie store that created pieces specific to the woman in question would become body defining for women all over the world!

One of the oldest forms of transport was given to the world by the inventor Comte Mede de Sivrac of France. Starting off with a wooden structure, the bicycle has become a part of our lives in many ways.

Early 19th century France, where every meal was accompanied by wine; the times when people considered beer and wine “hygienic” beverages to avoid water-borne diseases.  It was during this time that wine and beer decided to go sour on people and Louis Pasteur had to step in. A French chemist and inventor, Louis Pasteur invented a heating process which sterilized food and liquids, killing the micro-organisms that contaminate it. Voila Pasteurization.

Imagine being a cook in the 18th century, serving a Duke and his army under a long siege. The struggle to keep the Duke happy with his Versailles banquet habits and the army entertained; all this with only eggs and olive oil at hand! What would you have done in this situation?

You beat and beat and continue beating the eggs, which is what the cook did and christened the product “la sauce mahonnaise”. The h was replaced in no time and a y came into place, giving us the famous mayonnaise.

The mayonnaise was ready, but it needed to be kept cool! Now, now…the invention of the refrigerator has nothing to do with Mayo. It was actually Father Marcel Audiffren, a priest and a physicist who served in a monastery in France who patented a hand or machine-cranked unit that kept liquids cool. This patent went on to change every household.

To those familiar with sewing, Singer is a common and popular name. However, Singer only turned the sewing machine into a big business with his marketing strategies. The sewing machine came into existence thanks to the tailor, Barthelemy Thimonnier who worked tirelessly to perfect his “Couseuse” or “machine à coudre” the sewing machine. Although a great inventor, he died a poor man while his invention made many others millions.

So many romantic proposals would have lost their glim glam without this one. Two French brothers, Joseph and Jacques Etinner Montgolfier invented the first balloon made of paper and used air heated by burning wool and moist straw.

It’s quite a challenge to keep Napoleon Bonaparte’s troops well-fed, especially when they are continuously on the move with no means to store and keep food fresh. A reward of 12,000 Francs and nine years later, Nicolas Francois Appert managed to accomplish the task of preserving food for extended periods of time. He did this by sealing a thick glass bottle of food, wrapping it with a canvas for protection and then dunking it in boiling water. Later, Pierre Durand made the switch from glass to tin cans, and hence the term “canning”.

Besides these, the French inventions include – the Aqua Lung which is used for underwater oxygen supply, a barometer which is used to measure air pressure, the lead pencil, parachute…and the list of monumental inventions goes on. The course of history would certainly have been different without these inventions!