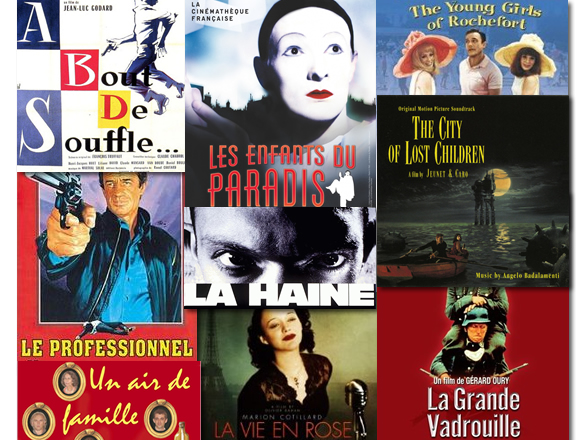 On hearing “Je ne regrette rien” for the first time, had Edith Piaf exclaim, “You’re marvelous! This is exactly what I’ve been waiting for! It’s incredible! It’s me! That’s my life, it’s me.”

If you have had any exposure to French music, then you know that Edith Piaf is an international French legend. The French song in the voice of Edith Piaf (1960) is a melody that has stood the test of time. Remember the movie Inception (2012) by Christopher Nolan? It was one of the most incredible movies of the year, and the song was featured extensively in it. Madagascar and The Simpsons used the song to inspire the characters as well. Wouldn’t you want to know more about the legendary Edith Piaf? Well, the French movie “La vie en Rose” is a biography and a MUST-WATCH!

So, continuing with our list of best French movies from last week, here are our recommendations –Take 2. Get your popcorn ready!

A movie that began winning a cult following! A sci-fi fantasy tale revolving around a seedy waterfront world populated with runaway children and sinister adults… This movie is a surreal fantasy and you are bound to fall in love with the relationship of the lovely Miette and kind One.

A French spy out to kill an African dictator only to be imprisoned under a political whirlwind. Joss Beaumont (Jean-Paul Belmondo) plays a magnetic rebel as he escapes prison and stays out of captivity against the French Government’s every trap.

This movie is a great comedy that holds in the ranks of “It’s a mad, mad world” and is one of the most successful films ever in France. The story revolves around the antics of two ordinary Frenchmen who help the crew of a Royal Air Force bomber shot down over Paris to make their way through German-occupied France to escape arrest.

Writer-director Mathieu Kassovitz presents France’s unfortunate history of intolerance towards outsiders in this powerful drama. This low budget film draws on much tension and leaves you emotionally reeling with its pointed dialogues and story line.

A land marker in the French New Wave, this movie is a testament to the great ideas of fun film-making that brought about the movement. The movie is a love story between a small-time French hood and an American woman. 60 years later and still counting, this movie is still fresh and exciting.

Set in a Parisian theatrical world of 1940’s this movie depicts the love story of four men in love with one mysterious woman. Each one loves the woman in their own way and this movie has gone on to become one of the great romantic classics of international cinema.

A tribute to Hollywood musicals, the movie is vibrant and full of colors. Reminiscent of a Shakespearean comedy, lit up with brilliant scores, this musical taps a romantic yearning that is hardwired into us. Famous French composer Michel Legrand composed the wondrous music in the movie that left us all humming the notes.

The movie revolves around hilarious catastrophes that occur on a Christmas night in a Parisian telephone station. Adapted from a play, the movie is a fantastic adaptation of dialogues and screenplay. The characters remain memorable and the humor depicted in the movie is bound to tickle your funny bone even today!

This movie is bound to make you fall in love with French cinema if you aren’t there already. The symphony of dark humor explores the many dynamics that revolve around a family. The family members get together for a birthday but poking sour spots and relaying it in the form of humor overpowers the celebration. The humor delves into finding many universal truths in its family tensions.

No, we didn’t forget about our beloved Edith Piaf. What can we say about this international legend that millions in the world haven’t already said! We’ll let you create your own image of the idol.

On this note, we leave you to hear for yourself the enigmatic voice of Edith Piaf.