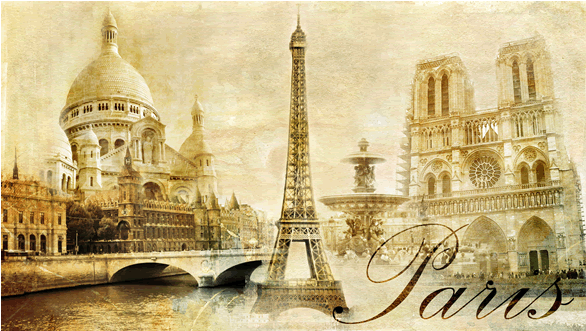 “There are only two places in the world where we can live happy: at home and in Paris.” said Ernest Hemingway.

When you think of France, Paris is an instantaneous visual image. And rightfully so! Paris…the most visited city in the world. Every year, Paris is said to host more and more tourists leaving the likes of Rome, London and Athens way behind in the tourist race. But what’s the reason for this? It is said that people visit Paris for the sentiment, for the experience since Paris is “a city of love” and a “holiday which is always with you”. So if you are in Paris, you should take in every bit of it. We give you the MUST-SEE’s of Paris.

Places that cannot be missed, sights that must be seen, experiences that must be felt when in Paris. The team of French District gives you their recommendation to immortalize your stay in Paris. Without further ado, drumroll please…Welcome to the city of Paris!

This one goes without saying. Gustave Eiffel’s 317 meters (1040 feet tall) design stands tall in the center of Paris and is symbolic of Paris and France for the rest of the world. Even if you decide not to scale or see the Eiffel Tower, you will encounter it as it looms high over Paris. The Eiffel Tower can truly be appreciated only in person; the view of Paris from its 3 floors in unbelieveable. And at night, 200,000 watts of lighting give this structure a magnificence that is overwhelming. While you are there, you should also see the Palais of Chaillot and the Trocadero.

One of the world’s most impressive museums, the Louvre was built as a fortress, used as a home by King Charles V and also served as a Renaissance palace. Napoleon renovated the Louvre as a museum and it now boasts of some 35,000 priceless objects. Its own grandeur worthy of praise as the objects it holds. The Louvre is home to the portrait of Mona Lisa which is arguably the most famous painting in the world. Besides Leonardo’s magnificent painting, you can feast your eyes on many other sculptures, paintings, prints and more in the 12 mile walk across the Louvre.  The Tuileries garden is worth visiting and relaxing when in the Louvre neighborhood.

Psst…The Carrousel du Louvre shopping center entrance on Rue de Rivoli is a winner if you want to skip the lines.

Literally “the heart” of the country, geographically as well as spiritually, the Cathedral of Notre Dame stands majestically on the Ile de la Cite. The Ile de la Cite is one of the remaining islands on the Seine within the city of Paris, right at the center of it. You may end up associating this mammoth of a structure with the Hunchback of Notre Dame as you climb its 387 steps to see the gargoyles. But words or pictures cannot do justice to this Cathedral. The level of detail put into the sculptures is mind-boggling. The sight of the chimères keeping a baleful watch over the rooftops of Paris is well worth your aching knees.

The basilica at Montmartre – Sacré Coeur expresses a singular faith in beauty’s power to move. Built to cure the country’s ill fate in the face of military defeat at the hands of the Germans, the basilica holds its ground on the highest hill of Paris, Butte Montmartre. The large white façade is clearly visible from many angles all through Paris.  Climb (it is a feat) or take a cable car to see the beauty that is the Basilica at Montmartre – Sacré Coeur. Walk around the Montmartre neighborhood, trace the maple-dappled paths of the Montmartre cemetery, and visit the Lapin Agile Cabaret and Moulin Rouge to experience a more local color than you would in the center of Paris. You can see that Paris is the city of love when you come across the Le Mur des Je t’aime or The Wall of I love you which has engravings of love in every language.

Psst…the crêpes available at Montmartre are deliciously to die for.

Built to be a hunting lodge, one could wonder about the modesty of the owner. But then again, the hunting lodge belonged to Louis XIII and he was only the King of France. The Château of Versailles is symbolic of absolute power of a king, the decadence of royalty and classical French art. The interiors are detailed to perfection and everywhere you look you will see engravings, paintings, furniture, royalty and grandeur. Imagine 700 rooms, all furnished similarly. And if that were not enough, the gardens will hold you in their magnificence. It could take weeks to stroll through the gardens designed by the the landscape gardener Andre Le Notre.

Psst…there are plenty of salons and major buildings like the grand Trianon, le petit Trianon and Marie Antoinette’ chalet worth visiting besides the gardens, fountains and the palace itself…so plan ahead as a single day may not suffice. This is also a good 40 minutes from Paris.

The Orsay museum is one of Paris’s most famous art museums thanks to its powerful collection of the best works of artists from the 1848-1914 period. The paintings here are so famous and incredible that everything else from sculptures to decorative arts could miss your eyes. Works of Delacroix, Monet, Degas, Gaugin, Toulouse-Lautrec and Van Gogh make for the fascination of this museum.

Psst…just for laughs (no disrespect intended). Toulouse-Lautrec lost one leg in an accident at the age of 12 and the other two years later. So, To -loose one leg is unfortunate, Toulouse two is 😉

The street is marked as one of the most beautiful avenues of the world.  Built in the 17th century, the avenue is lined by majestic buildings, gardens with beautiful fountains and grand buildings including the Grand and Petit Palais. The avenue will give you an idea of why Paris is called the fashion capital of the world, with the designer labels, avant garde salons and exhibitions that make for Champs Elysées. Enjoy concerts at theaters, restaurants or go shopping…enjoy the Vanity Fair that is Champs Elysées.

The Arc de Triomphe stands at the center of Place de l’Étoile which forms the hub for 12 avenues. Built as a promise by Napoleon to his soldiers honoring them for their life and sacrifice in the French Revolutionary and Napoleonic wars, the huge structure offers a great view of Paris. Although Napoleon was ousted by the time it was complete, the Arc de Triomphe bears engravings of the names of generals who served in his regime as well as many other martyrs. If you missed going up the Eiffel Tower, the view from the Arch will make up for it.

Whatever the season, whatever the weather, Place Vendôme is an epitome of luxury! So much so that Rue de la Paix (the most expensive street in the French Monopoly) leads to it. Place Vendôme is one of the best architectural ensembles in Paris. The Vendôme Square was built somewhere in the 17th century and even today, this place has not lost its appeal and prestige. The square is home to a column built in original marble by Napoleon in pure imitation of Trojan’s Column in Rome. Many prestigious names in jewelry, fashionable and luxurious hotels mark the Vendôme Square even though some of their entrances are inconspicuous.

Psst…Opulence at its best can be seen at the Opera Garnier which is close to Place Vendôme.

No, it is not a factory. No, definitely not a docked ship either. Centre Georges Pompidou is a large and modern cultural center that houses one of the biggest modern art museums in the world, a public library and a research center for music and acoustics. There always seems to be a festive atmosphere on the “piazza” in front of the museum and groups of street performers can be witnessed everywhere. Don’t let the whimsical exterior of the Centre Georges Pompidou throw you off. It is well worth a visit.

With all its attractions and beauty which cannot be missed, Paris rises above its own hype. There is so much more we want to write about when it comes to Paris. Maybe we will come back with more for you soon.