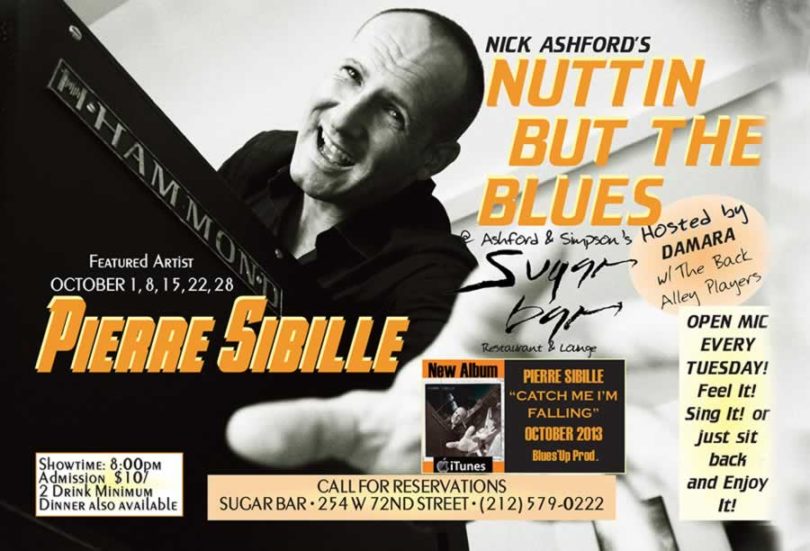 The French composer, keyboardist and vocalist Pierre Sibille will be performing at the Sugar Bar and presenting his new album “Catch Me I’m Falling” – on October 22nd and 29th 2013.

Pierre Sibille is the artist of the month of October at Nick Ashford and Valerie Simpson’s legendary Sugar Bar. He will be playing at Nick Ashford’s famous blues night: “NUTTIN’ BUT THE BLUES” with Damara & The Back Alley Players.

Pierre Sibille invited Valerie Simpson to be a part of his charity composition “Light in Senegal” orchestrated with BLUES’UP.

This song is the beginning of a communication in support of organizations like EMPIRE DES ENFANTS, SPER center, Dakar SAMU SOCIAL, VILLAGE PILOTE, FUTUR AU PRESENT, YAAKARU GUNUYI who work to educate, support and reunite street children with their families. There are 200,000 children living on the streets in Senegal.  BLUES’UP wants to to defend and make their cause a priority!

Artists have come together to sing and record “Light in Senegal“, but the fight has only just begun!

A documentary “Something from the Street” by Pascal Nazzaro (Natty Brothers Production) in association with BLUES’UP showcasing Senegalese children will be released on October 29th, 2013.